The Blog is Dead - LONG LIVE THE BLOG!

As swan songs go, this is as good as it gets, I'm afraid.

Moving on to pastures new - my latest venture, Flare Miniature Painting - I'm not going to have the time to work on this blog any more.

(Regular readers will have noticed a rapid decline in posts just lately...)

Fear not, though!  I'm not leaving, just moving.

From now on, updates on what I'm doing hobby-wise will be posted at:

And of course, I would never rule out posting more Blood Bowl updates here in future...

In the meantime, head over to the new blog and have a look around, or visit my new website, www.flareminiaturepainting.co.uk!

See you there and thanks for reading,

TAKEN FROM THE JOURNALS OF HEAD COACH LYSENKO, PUBLISHED POSTHUMOUSLY :

“...I watched the last game of the season from the stands and I had to admit, despite my loathing for Stark-Elm, there’s little that I might have done differently. If I hadn’t hated her so much, I would have truly admired her, the way she commanded the field, orchestrating every movement of the Hackers’ game while herself playing with her usual ferocious grace.

In all the jubilation at the final whistle - the Hackers cheering and dancing like the league was already theirs - nobody noticed as I slipped past the dryad bodyguards and into the tunnel to the dressing rooms, hidden amongst the shambling forms of the defeated Blessed players as they headed for their sombre dust-baths.

I made my way to the Hackers’ dressing room through the narrow wooden corridors, one hand hidden beneath my robes and clutched tightly to my chest. I knew the stadium well and didn’t need to follow the light footfalls in the loose earthen floor to find where I was going, like any common assassin might. I saw not another soul by the time I had reached my destination and slipped inside.

It was there that I intended to wait for the return of Stark-Elm and the others who had betrayed me. Yes, they would burst through those doors, songs of merriment and victory upon their lips, joyous and gay as I sat ready for them, waiting to cut the head from the serpent who had taken my team away from me.

I did not have to wait long.

Footsteps approached. Were they whispers outside? Slowly, silently, I drew the weapon...

The door opened and it was not who I was expecting. Then everything went very black.

I awoke with a scream and it was as dark as pitch. Wooden walls pressed in all around me! The air was hot and so thin that I could barely breathe. It felt like I was being suffocated within my own untimely coffin! Naturally, panic defeated any sense which I had left and my fists and feet pounded at the sides of my casket. My fists were grazed bloody and raw before they managed to splinter the door of the locker. I fell graceless and shivering into a heap on the floor, sucking in the dirt with my desperate breaths.

Any ecstasy of relief which I felt was short-lived when I finally found strength to look up: My eyes were drowned by an ocean of gore and I knew in an instant that the Green Glade Hackers were dead. Their bodies lay strewn about, limbs bent in ways that even their limber frames could never have dreamt of. Puddles of blood congealed on the soft floor, fountained from headless necks or limbless torsos; run like rivers from their eviscerated carcasses.

Few of them, could I now name. The shock of magnificent red hair could only have belonged to Stormwind, perhaps my favourite of all, though now it hung swaying from the ceiling, dangling only the dripping cap of her skull beneath it. And who could mistake loyal Clooney? Oh, confined to the bench for the last game, could he not have turned his back on this team when I had? If so, then maybe one of the ragged ears of his trademark bearskin hood would not be protruding from his gaping mouth while the rest burst from his rent chest like the stuffing of a broken toy. And finally of course, there was Stark-Elm herself. In the end, I took no pleasure in seeing her dead, lain there as she was, failing to hold in her disembowelled innards with a copy of Spike Magazine. One of her hands was smashed and the other missed two fingers. In her eyes there was fear, which I had never seen before. In death, the Queen of the Blood Bowl Field had departed and all that was left had become ordinary.

I had barely staggered to my feet when cries could be heard far and wide of Calamity! and Woe! My clothes felt heavy and wet and, when I looked down at myself, dread settled into the pit of my stomach. I was smeared from head to toe in streaks of fetid offal and oozing blood. Indeed, a hand to my face revealed that it had been plastered there like the war-paints of the Savage Orcs or the wild Giants of the North. I could hear the corridors fill with approaching elves, screaming their hatred and I knew that I would never live long enough to explain myself. I did not need to check my pocket to know that my marvellous weapon, the scroll which proved Stark-Elm’s role in the death of Twister Pine-Cone, was gone! It lay scattered and illegible amongst the red ruin of my former team.

I bowed my head, my life was undone.

Yet from behind me, something stirred. Before I heard its movement, I could smell its bovine hide; animal, mixed with sweat and slaughter. Hot breath steamed down from above me, condensing into foul droplets which ran down my neck and back. I dared turn only enough to see the hand which clenched about my shoulders, so tight it felt like my whole body would break. Its skin was black like scorched leather, cracked and hard, glistening with flecks of dried blood and run throughout with old scars and new. Yet amongst this silhouetted form, five shards or colour rang out – Each of the monster’s fingernails had been painted a violent shade of pink!

The creature pulled me closer to itself and I cried out in pain as my bones almost snapped. I could hear it trying to form words from whatever it had for a mouth. They came out as wild brays at first, then hacking grunts, before finally, it managed:

The creature’s breaths burned hot in one ear, the murderous cries of the approaching elves rang in the other, and I knew then that I had no choice...“
Posted by Flare Miniature Painting at 14:50 No comments:

The Hackers fans could find little to complain about tonight, especially as the Midway Monsters' promised Pain Train failed to turn up at the stadium.

It is true that the first few minutes of the match were filled with nerves for the elves, having not only a minotaur, an ogre and a troll bearing down on their front line, but also Bolgrot and his chainsaw and Fezglitch with his surreptitiously concealed ball and chain to contend with.

Both Hackers fans and Monsters fans feared for their star players, Stark-Elm the Reckless and Jarek Chi'll. Stark-Elm, who was recently voted No. 1 in Spike Magazine's 'Hottest On The Pitch' readers' poll, seemed especially nervous about preserving her million-crown body, whereas (if pre-match hype is to be believed) Chi'll was determined to dismember it.

It all looked good for the Monsters, winning the kick-off and sending every ounce of muscle, death and chainsaw immediately at the Hackers before they had chance to react. As expected, Bolgrot was instructed to take out Stark-Elm before she got anywhere near their prized Jarek Chi'll, but his most brutal strike managed somehow only to tear the Wardancer's outfit and reveal a tantalising strip of midriff - something that half the crowd were ecstatic about, while the more cynical among them felt that this was an utterly unrealistic publicity stunt. Either way, seconds later, Bolgrot was knocked to the crowd who, in their gratitude for the show of elf-skin, carried him jubilantly from the stadium on their shoulders.

'The Fez' was more successful, managing to knock treeman Girth off his feet in the first seconds and then proceeding to topple elves with every swing. It was the bravery of Clooney the Bear which saved the Hackers' game when, against all odds, he stood toe-to-iron-ball with Fezglitch and managed to knock him out cold.

After that, the Monsters crumbled, their dreams of a bloodbath evaporating before their eyes. In fact, after barely scratching an elf (though two were rendered unconscious for a brief spell), they found themselves on the receiving end of the Hackers' darker side, losing three players to 'the Green Fury(TM)'.

Goblin of the Match was awarded to the outlandish Leeroy the Wretched VIII for his consolation touchdown after being lobbed almost into the end-zone by ogre Terminator Burt.

Even the Wood Elves in the crowd were pleased by that one!

Sadly, the much-hyped fight between Stark-Elm and Jarek ended up as no more than a single strike, Stark-Elm feebly pushing Jarek as he danced past her, clutching the ball. Complaints were levelled at one match commentator who was heard to whisper off-mic to a colleague, 'Bloody Elves, they're all in it together...'

In an unrelated piece of news, investigations are now under-way to discover how the tree-biers of all twelve Hackers players managed to catch fire at the same time. The Monsters' head coach was not available for comment.

Here are another set of Blood Bowl Orcs, this time in red and black... 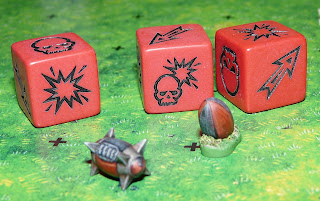 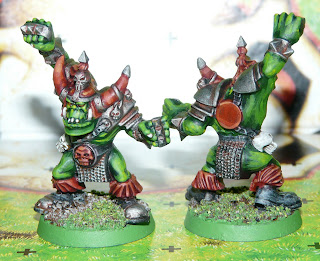 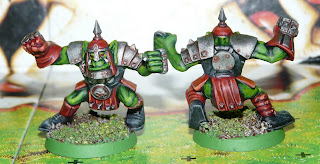 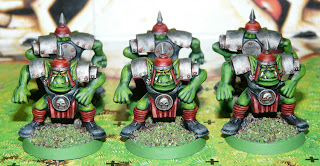 
Posted by Flare Miniature Painting at 14:45 No comments:

Here are some pics of the Human Blood Bowl team I recently painted, trying out a red and black colour scheme... 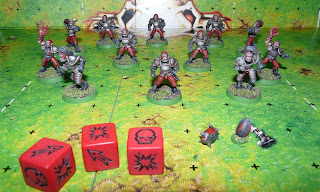 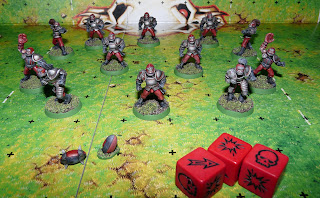 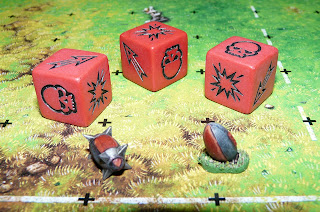 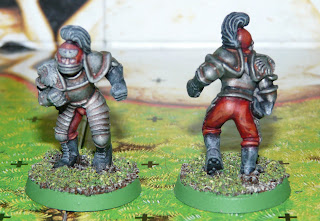 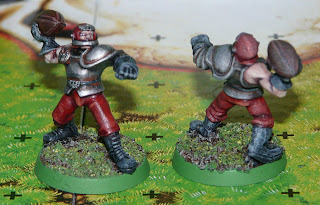 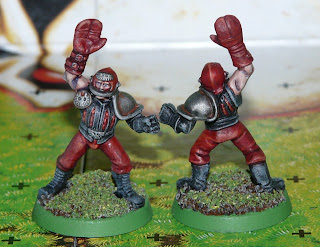 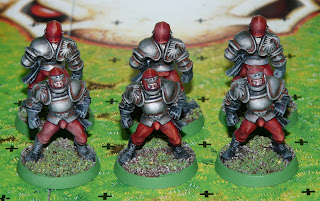 Posted by Flare Miniature Painting at 15:57 No comments:

Hurrah!  After what seems like months (well, it actually was) punctuated by births and holidays and gardening (of all things), I've finally managed to complete my Space Wolves Land Raider Redeemer.

It's the first tank I've painted since doing a couple of Rhinos over twelve years ago, so it was quite daunting.

Still, I wanted to have a go at doing so green work to make the tank a little bit more unique - the furs are a prime example.

In case you were wondering about the name, it's not a Dark Angels dig (despite the doormat on the front ramp, pictured below), but a nod to the tank's main purpose, which is do destroy my best friend's Blood Angels army.

We have our third battle next Saturday (2000 points) and we're currently drawing at one game each... 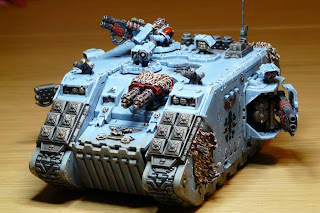 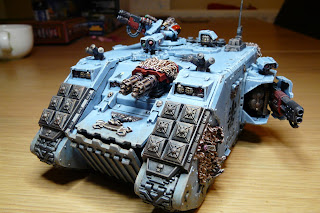 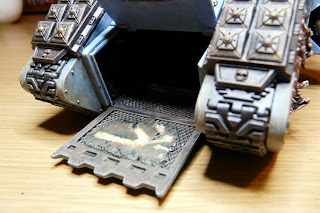 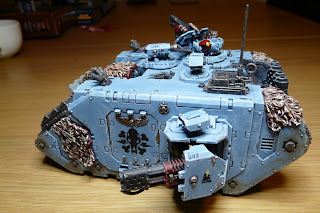 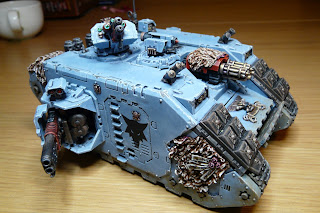 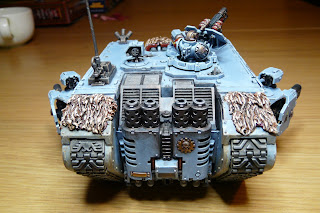 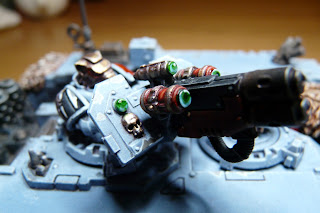 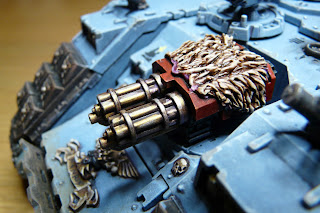 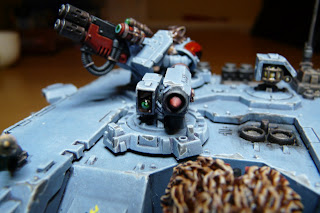 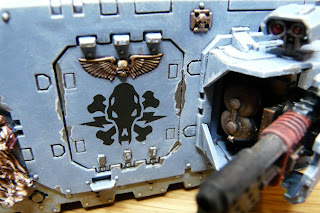 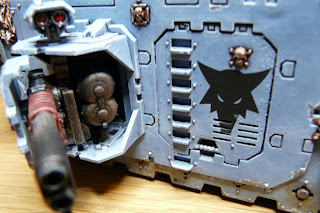 Posted by Flare Miniature Painting at 22:30 No comments:

Here's a couple of teams for your perusal... 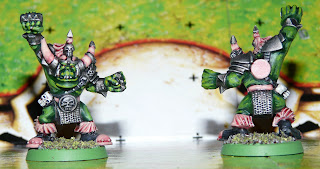 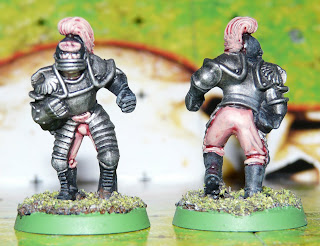 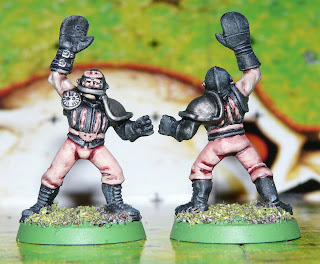 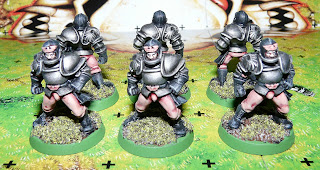 Let me know what you think!
Posted by Flare Miniature Painting at 21:33 No comments: